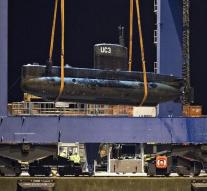 copenhagen - The police in Copenhagen began the submarine Nautilus, on which the murdered journalist Kim Wall was last seen, with a special scanner. Submarines in general and those of inventor Peter Madsen in particular have more hollow spaces, according to the police.

The police are looking for traces of a crime, but there are no concrete indications that something has been hidden in the submarine. The Danish owner / captain Madsen of the submarine has said that the Swedish journalist aboard the Nautilus was killed by an accident. But in what way is not known.

The torso of her body was later south of Copenhagen. Head, limbs and clothes are missing any trace. Tuesday and Wednesday, search dogs are further searched in the Bay of Køge. The submarine had sunk on August 11th.