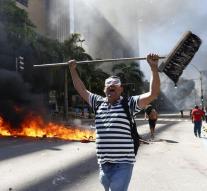 - Demonstrators police on Tuesday continued to attack in Rio de Janeiro. A protest against the austerity measures of the Brazilian government of Michel Temer was seriously out of hand when police and demonstrators together caught up in conflict. According to the BBC the protests Tuesday were the most violent so far.

Many of the protesters were officials for months have received no wages. Police tear gas and grenades used to disperse groups of protesters. From a police invaded church officers fired rubber bullets at hundreds of protesting officials. The church is located next to the government building that was the target of the protests.

Several people, both protesters and officers, were injured.