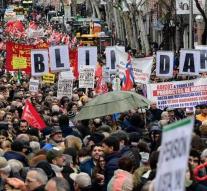 madrid - Tens of thousands of pensioners have demonstrated throughout Spain to raise their pensions. In the center of Madrid a huge crowd gathered Saturday despite the pouring rain. On banners were texts like: 'I am a pensioner, not an idiot!' And 'thieves! They steal our pensions! '

Demonstrations have also taken place in many other cities, such as Barcelona, ​​Seville, Bilbao, the Canary Islands and the Balearic Islands. In all, more than a hundred demonstrations were planned throughout the country.

The protests were held under the motto 'worthy pension payments. 'The participants demand an appropriate payout that will be adjusted to inflation. The conservative government of Mariano Rajoy had symbolically increased the pensions for 2018 by 0.25 percent. Inflation, however, was 2 percent in 2017, which represents a significant decline in purchasing power for pensioners.

On average, a man in Spain receives 1247 euros in pension benefits, a woman 797 euros, wrote the newspaper El País recently. In recent weeks, the pensioners of Spain have gone up the street several times in protest.