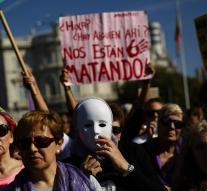 - Tens of thousands of people Saturday in the Spanish capital Madrid demonstrated against female violence. At the protest march organized by feminist groups, representatives of all political parties participate, the BBC reported.

The protesters are demanding that the government make the fight against violence to women subject of policy. Besides better laws also needed to alleviate the social and economic consequences for victims and their children, said one of the speakers at the Plaze de Espana. Were over 20. An estimated 000 people participated in the march.

According to figures from the organizers of the demonstration demanded the violence against women in Spain in the years since 1995 more than 1300 lives. The problem of the ' macho culture' fueled violence does not decrease ; This year there have been 85 deaths, according to the figures.