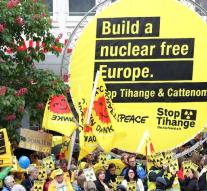 aken - More than 1500 Dutch protesters demonstrated on Thursday during a visit by the French president Emmanuel Macron to Aachen.

The German city is close to the Dutch border. The action was directed against France's support of the nuclear power stations in Tihange and Doel. More than a quarter of the shares in owner Engie of the Belgian nuclear power plants are owned by the French state.

The demonstrators called on Macron to commit to shutting down the 'tear reactors' Tihange 2 and Doel 3. The campaigners gathered at the Markt in Aachen with flags, banners, bells and whistles.

Macron was in the German city to receive the so-called Karlspreis, an annual award for people and organizations committed to European unity. During the presentation of the prize in the town hall, the protesters in the neighboring Market made a lot of noise and called slogans.