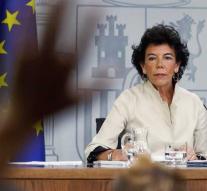 barcelona - Catalans marched massively on Monday evening in Barcelona to underline that separatism is still alive in Catalonia. The police estimated the turnout to 180,000 people according to Spanish media. The largest banner read: 'Self-determination is a human right.'

The crowd gathered at Plaça de Catalunya in the center of the city and then walked to the parliament building. Some of the protesters also went to the headquarters of the federal police. This led to tensions and in some places to some skirmishes with law enforcement officers. They solved some warning shots to spread the demonstrators.

The event was organized to commemorate the independence referendum of a year ago. The plebiscite, which was banned by Madrid, degenerated into disturbances, among other things because the police tried to prevent citizens from going to the polls.

Isabel Celáa, the spokeswoman for the new Spanish government of the socialist Pedro Sánchez, described the police deployment as a 'mistake' by its predecessor. 'She mentioned October 1 a sad day, but called on the Catalan government to stop at the same time with her' confrontational rhetoric. '

Regional Prime Minister Quim Torra stressed that his cabinet is maintaining the 'democratic mandate' of the referendum and continues to support the people who suffered the reprisals. After the vote and the decision to separate Spain, Madrid replaced the regional government of Carles Puigdemont in the autumn of 2017. The leader fled to Belgium.

Earlier in the day, separatists blocked some important roads in Barcelona. They also laid down train traffic for some time in Gerona. The demonstrators also entered the Catalan government building in this city to iron the Spanish flag and hoist the 'estelada', the flag of the independence movement. There were also demonstrations in Lleida and Tarragona.