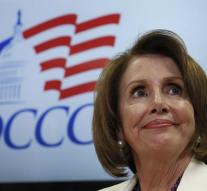 - The election of the new chairman of the Democrats in the US House of delegates has been postponed. That is the current Chairman Nancy Pelosi decided after the disappointing results of the American elections last week. The successor Pelosi is now elected on 30 November.

Democrats in the House came under increasing pressure to postpone the choice of a successor. Republicans have won a majority in both the Senate and the House and originally was Thursday before the new chairman of the Democrats to be elected. Delaying the election gives candidates for the spot Pelosi or candidates for other posts more time to campaign.

As far as known, there is a candidate who may want to take against Pelosi: Tim Ryan of Ohio. Others also consider making a bid for the presidency, but there is no clarity yet.