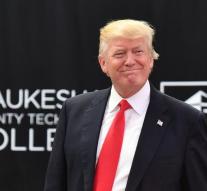 washington - Over 190 politicians of the Democratic Opposition in the United States drag President Donald Trump to court. In his eyes, he had to ask permission from Congress before his companies accepted payments from foreign governments.

Since Trump took place, in January, its companies would have received money from foreign governments. According to the Democrats, this is a violation of the constitution, which stipulates that elected directors can not accept any gifts or payments without asking for parliamentary permission.

Certainly thirty senators and 166 deputies have joined the lawsuit. According to two politicians involved, it is the first time that so many parliamentarians accuse a president. Deputy John Conyers said that 'Trump seems to use his presidency to make as much profit as possible'.