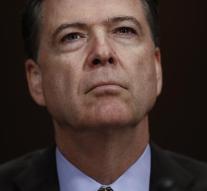 washington - Democrats in the US are bewildered by the completely unexpected dismissal of FBI director James Comey. They pulled the comparison with President Richard Nixon's decision to dismiss the independent prosecutor's office during the Watergate investigation.

Comey investigated possible links between the Republican campaign team of Donald Trump and Russia. Members of the Trump campaign team should have had contacts with Russia prior to the elections. That research has not yet been completed.

'This is Nixoniaans,' says senator Bob Casey on Twitter. Casey has to come up with a special prosecutor who will take the Trump Russia investigation. 'Shameful,' said senator Ron Wyden from Oregon. 'This is abusing your power,' said Eric Swallwell, member of the House of Representatives in California.