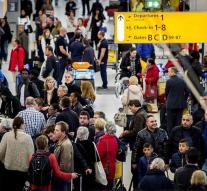 geneve - Demand for air travel has continued to grow rapidly after a strong summer season, thanks to falling ticket prices. This is evident from the transport statistics for October, which the international industry association IATA has published Thursday.

The demand for tickets in October was 7.5 percent higher than a year earlier. That is in line with the growth of 7.4 percent a month earlier. The increase in the number of available seats was limited to 5.7 percent. The average occupancy rate, an important measure of efficiency, rose by 1.4 percentage points to 80.5 percent.The average price of a ticket was in the first eight months of the year, 5 percent lower than a year earlier. That price drop has made a significant contribution according to IATA on the increase in sales.
NEW