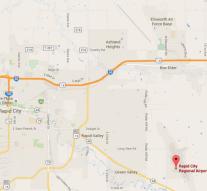 - A flight of Delta Airlines in the United States landed at the wrong airport. Flight 2845 was not the intended airport Rapid City right, but alighted at the military airport Ellsworth Air Force Base. Both airports in South Dakota are approximately 15 kilometers apart.

How it could happen is still unclear. The aeronautical authorities do more research. 130 people were on board. After the pilots had detected the fault, the unit still left for the last part of the trip.

Two years ago landed a unit of Southwest Airlines in the wrong airport in Missouri. The purpose of this flight was Branson Airport, but accidentally the pilots chose a much smaller regional airport. Because the runway was shorter there, the pilots had to brake sharply. No one was injured.

Wow! The most expensive house in China