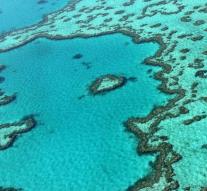 canberra - A chapter on the Great Barrier Reef in a UN report on climate change has been deleted at the request of Australia, because the information would be detrimental to the Australian tourism industry. It reports the Guardian.

The report was prepared by UNESCO, which goes to the United Nations over the world, and climate scientists inside and outside the UN. An important chapter in the draft version was dedicated to the unique coral formations of the Great Barrier Reef and the negative impact of climate change on the reef. When the Australian Department of Environment here got wind of, made the objection and eventually UNESCO deleted the entire chapter. This Australia was the only continent that is not in the report.

A spokeswoman reiterated the economic concerns of the ministry.,, Recent experience in Australia shows that negative comments have world consequences for tourism. ''