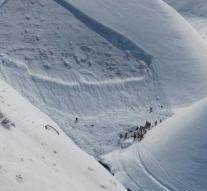 aosta - An avalanche in the Italian Alps has killed two skiers. Two other victims were transferred to the hospital with severe undercooling symptoms. A person is still missing. Two helicopters and search dogs were deployed during the rescue operation in the Pila ski area in the Aosta valley.

Despite the fact that the ski season is almost over, the conditions are still very good because there is a lot of fresh snow every time. So much that an unfortunate snowboarder stifled Thursday after a fall in which he ended up with his head in the deep snow.

The 23-year-old Brit crashed off piste just twenty meters from the track. When other skiers saw a snowboard from the snow, she discovered the snowboarder. Although the boy could be dug quickly, the help was no longer useful.