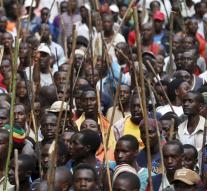 geneve - Increased violence in Burundi takes alarming proportions, the United Nations warned Friday. The High Commissioner for Refugees of the United Nations, Prince Zeid Ra'ad Al Hussein, pointed Friday to sexual violence by security forces and by a sharp increase in the number of disappearances and torture.

Zeid wants that research is being done to events on 11 and 12 December in Bujumbura, where at least nine mass graves were found. The attacks on three military bases and the massive violations of human rights immediately afterwards, seem to have new and very disturbing violence causes.

The increasing number of disappearances, along with allegations of secret detention centers and mass graves, is very alarming , Zeid said.

In the mass graves would be more than a hundred bodies. They were dug by people from the youth militia Imbonerakure, which in some cases were executed afterwards.

The UN heard from residents of neighborhoods where the attacks after extensive searches were done, that the actions were mainly directed against the Tutsi. According to a witness Tutsis were systematically slain while Hutus were spared.