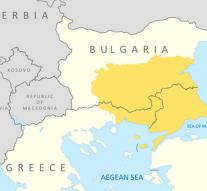 - Bulgarian archaeologists have in a tomb from antiquity found the remains of a Thracian princess. The corpse was decompose. Nikolaj Ovtsjarov in charge at the excavations near the village of Benkovski said on state radio that after the death of the noble woman's body during a religious ritual in pieces is dismantled.

The Thracians inhabited large areas in the Balkans in the ancient world. In Bulgaria are already many tracks, including gold treasures found. The now discovered burial in the southeast of the country probably stems from the time of the Macedonian king Alexander the Great (356-323 BC). There are more than sixty jewelry of silver and bronze unearthed, including eleven rings, a diadem, necklaces and earrings.

The archaeological expedition at Benkovski began after the discovery of a stone altar, presumably part of a Thracian temple.