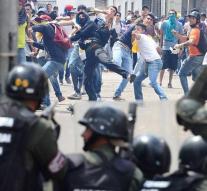 caracas - is late on Wednesday a police officer killed in the mass protests in Venezuela. Two other officers were wounded. That said Interior Minister Nestor Reverol. The opposition leader Henrique Capriles said earlier that the marches 120 people were injured.

Hundreds of thousands of people across Venezuela Wednesday went to the streets to protest against President Nicolas Maduro. The enraged protestors believe Maduro behaving like a dictator.

The Election Commission, which is in the hand of the President, last week put a line through plans for a referendum, because there would be fraud with the collected signatures. According to the opposition, which is trying to get some time off from Maduro, the president has put pressure on the judiciary and the electoral commission to stabbing a stick for the referendum.