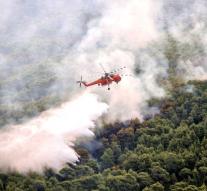 athens - The forest fires that plagued Greece at the end of July killed at least 93 people. The authorities have announced this on Thursday. The population protection service had just published a list of victims with 92 names when a seriously injured person died in a hospital. At least eight people are still in danger of life.

Among the dead, who ranged in age from six months to 93 years, are eleven children. Four victims came from abroad: a Polish woman with her child, an Irishman and a Belgian.