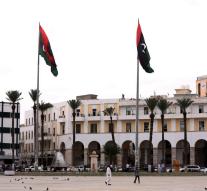 - At least twelve people have been killed Tuesday by a helicopter crashed west of the Libyan capital Tripoli. That communicated by the authorities in Tripoli.

The helicopter may have been hit by shots before he crashed into the coast near the city, said a spokesman.

The unit was on the way funds have been moved to a local bank in Tripoli and during the crash have been on the way with residents of the capital on board.