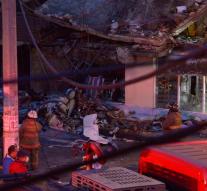 bogota - An airplane is Sunday local time in the Colombian capital Bogotá crashed into a bakery , while a fire broke out. According to police in Bogotá , five people died and seven others injured.

Colombian media reported that the pilot and the owner of the aircraft are under the dead.

The other three fatalities are a man, woman and child. Three houses next to the bakery damaged. According to the communication of the Conservative Party was the plane on the way to the Guaymaral airport in the north of Bogotá.

There would pick the former Colombian president Andrés Pastrana and other politicians.