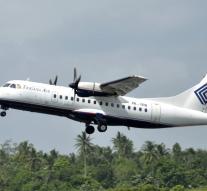 - At least nine people have been killed by a plane shortly after takeoff crashed in the Indian capital New Delhi. According to the Indian police were two pilots and eight technicians on board the aircraft. A person goes missing, the bodies of the other passengers have been recovered.

The plane, a twenty year old turboprop aircraft came down in a residential area west of the airport. Nothing is known about the cause.