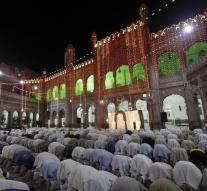 peshawar - Floods caused by heavy rainfall in northern Pakistan at least 28 people killed. Ten victims were surprised by the swirling waters while they were praying in a mosque.

That confirmed the authorities Sunday. Some bodies could not be recovered; 21 worshipers were injured.

The district Chitral, near the border with Afghanistan, the worst affected. Since it began to rain all Saturday and that went on all night. A local driver expects to be regretted even more deaths. It is not clear how many people are missing. Rescue workers are still on the road to some remote, mountainous region.