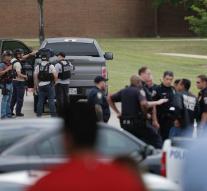 irving - The US police found two bodies after a shooting at a school in Irving, Texas. One of the deceased is probably the perpetrator, said a police spokesperson against local media.

The North Lake College was seized on Wednesday at the end of the morning after shots were unloaded. Students on campus were instructed to switch to the nearest room.

The two bodies were found according to the police in a building on the campus. It is still unclear whether the perpetrator has killed himself. Also, nothing is known about the motive for the shooting.