Home / World / Deaths floods Mallorca is on the rise 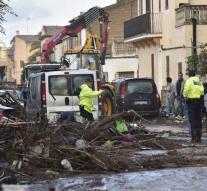 palma de mallorca - The death toll as a result of the severe weather that hit the Spanish archipelago the Balearic Islands has risen to twelve. On Thursday, two bodies were found on the island of Mallorca, which was hit by a flood due to heavy storms on Tuesday and Wednesday.

The victims were in place Arta and were found during a search for a Spanish boy who is still missing. On Wednesday, ten deaths were found, including an 80-year-old Dutch woman who was missing. It is not clear how many people are still missing.