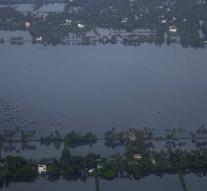 delhi - The death toll due to the flood in the South Indian state of Kerala has risen to 375. Over the past few days, 32,000 people have been rescued who were trapped by the high water, the authorities reported. More than a million people are housed in emergency reception centers.

The federal state has been struggling with heavy rainfall in recent times, but by now the worst would be behind us. The navy has announced that it will be phasing out its own rescue operation, now that high water is withdrawing in many places. Some inhabitants of the area return to their homes. They sometimes encounter snakes and snails in the flooded buildings, reports the newspaper Hindustan Times.

Some infrastructure can also be used again. For example, the busy International Airport of Cochin is expected to open its doors on 26 August. That complex was largely flooded.