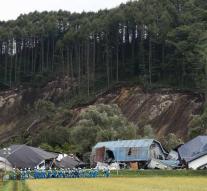 tokio - The number of deaths caused by the earthquake on the northern Japanese island of Hokkaido has more than doubled. Prime Minister Shinzo Abe said on Friday that at least 16 people were killed.

More than half of the 5.3 million islanders are without electricity. It can take at least a week before everything is supplied with power again, the Minister of Industry said. Air traffic is restarting at the largest airport on the island.

The quake with a force of 6.7, which took place on Thursday (local time), caused landslides, as a result of which houses were buried under rubble and mud. According to the authorities, another 26 people are missing.