Home / World / Deaths by quake Japan is on the rise 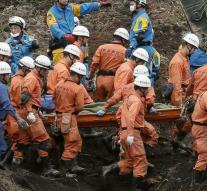 tokio - The number of deaths caused by the earthquake on the northern Japanese island of Hokkaido has increased further. The authorities reported to the newspaper Japan Times on Saturday that at least twenty people are dead and that eleven people are expected to not survive the quake because vital organs have failed. The death toll was still at sixteen on Friday.

According to the authorities, about ten people are still missing in the village of Atsuma. That is not far from the epicenter of the quake that hit the island of Hokkaido on Thursday.