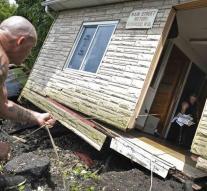 - Charleston Flooding in the US state of West Virginia have cost at least fourteen people died. Hundreds of others could hardly be rescued from their flooded homes. The floods are the worst in more than a century.

The floods caused by heavy rainfall mainly caused Thursday for huge amounts of water. Rivers occurred in many places outside of their banks, leaving several villages and towns were flooded. In some places the water level rose in no time with no less than 3 meters.