Home / World / Deaths by fire in China coal mine 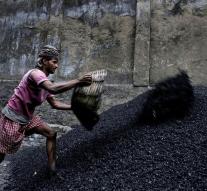 - A fire in a coal mine in China has killed at least seventeen miners life. The fire broke out Thursday at the mine in Liaoning province, state news agency Xinhua reported Friday.


Thirteen workers died on the spot, four others deceased later in hospital from their injuries. Welding were probably the cause of the fire.
China is the largest coal producer and-verbruiker world. Despite improved safety, accidents in the coal mines are frequent. In 2014 there were 931 deaths, according to the Chinese authorities. In the first nine months of this year, over 420 people were killed by accidents in the mines.
NEW