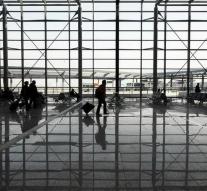 - A fire in the basement of the airport, Shanghai Hongqiao has cost two lives. Four others were injured, reported the Chinese state newspaper People's Daily.

The fire broke out in the basement of a terminal where a renovation is underway. According to an employee of the airport fire had no effect on traffic.

There is an investigation into the cause of the fire.