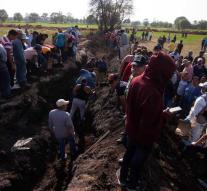 tlahuelilpan - The death toll due to the devastating explosion of a fuel pipeline in Mexico has risen to 94. The governor of the state of Hidalgo told Tuesday on TV that there are also 49 people because of...

In the city of Tlahuelilpan, several hundred people came to a line on Friday in which a leak had arisen to refuel free of charge. An unknown explosion followed a huge blast of 20 meters high.