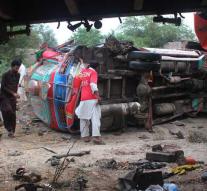 islamabad - The death toll due to a suicide attack on a Pakistani election meeting, has risen to about 150. Terrorist group Islamic State has claimed responsibility for the massacre in the southern province of Baluchistan, where, according to a high police officer, more than 180 people were injured on Friday.

The target of the attack was a manifestation of the BAP, the Baluchistan Awami Party (BAP). One of the dead is BAP politician Siraj Raisani. On a video clip you can see that he takes the floor shortly before the attack. He greets the crowd, after which an explosion sounds and the image goes black.