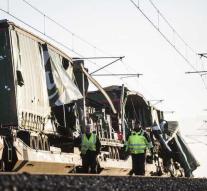 copenhagen - In the months in which Boca Juniors secured the championship for the second time in a row and qualified for the (lost) final of the Copa Libertadores, the intended stand-in of...

The accident happened Wednesday on the bridge between the islands of Zealand and Funen. According to the first research results, a train with 131 passengers was hit by a container that had fallen from a freight train during stormy weather. 'We heard a very loud bang and then the train stopped', a passenger said afterwards to the Danish channel TV2.

The authorities were more likely to assume six deaths and sixteen wounded.