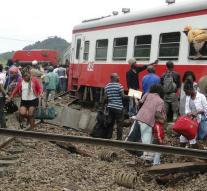 yaounde - The death toll from a train accident in Cameroon has risen to at least seventy. That President Paul Biya Saturday informed. Approximately six hundred people were injured.

Earlier, the authorities indicated that the derailment of the train 53 dead and some hundred injured.

The train was on Friday from the capital Yaounde to the port city of Douala. In place Eséka, 120 kilometers west of the capital, derailed the train. According to an accompanying journalist had shortly before departure from Yaounde additional cars added to the train. So could be carried more passengers. It is still unclear whether that played a role in the crash.