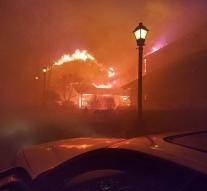 - The death toll from the wildfires in the US state of Tennessee has risen to at least seven. A day earlier there were three reported deaths. According to the authorities, there are also 53 wounded, US media report.

More than 14 000 people have fled hunted in the US city of Gatlinburg in Tennessee. The fire raged on the outskirts of the popular tourist park in Great Smoky Mountains and is expanding. The local authorities decided to evacuate residents and tourists in Gatlinburg. More than 700 houses have been destroyed by fire.

According to Governor Bill Haslam are the worst wildfires in the state in a hundred years. The strong wind made extinguishing the fire difficult, which already got some help Wednesday from the hard rain.