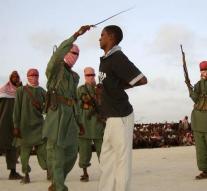 - The number of deaths has increased by two suicide car bombings in the Somali town of Galkayo to 25. Earlier it was reported that were killed in the attacks on Sunday, at least ten people and at least sixty people were injured.

The jihadist terrorist organization al-Shabaab has claimed responsibility for the attacks, which were the authorities both civilian victims as members of the security forces. Last week were arrested in Galkayo five members of al-Shabaab.

Galkayo is in the semi-autonomous Somali region of Puntland.