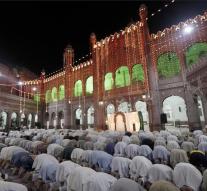 peshawar - The death toll from floods that were caused by heavy rainfall in northern Pakistan and India has risen to 55. That the BBC reported Sunday according to local authorities.

The district Chitral, near the border with Afghanistan, the worst affected. Since it began to rain all Saturday and that went on all night. There, 30 people were killed.

In northern India the monsoon kept home during the weekend. In the states of Uttarakhand and Arunachal Pradesh caused the flood to landslides that claimed 25 lives.


China also suffers from extreme rainfall. Local authorities said Sunday announced that the last two weeks 61 people were killed and fourteen people are still missing. These are the provinces of Hubei and Anhui in central and eastern China.