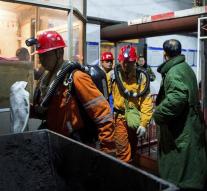 - 32 people killed in a mine accident in the Chinese city of Chifeng. Sunday, the last ten miners after an explosion at the mine were still missing, declared dead.

In the mine worked 181 people when the accident took place Friday. 22 appear to have been salvaged. Causing the gas explosion was caused is not yet clear.

In another mine accident in China this week were already 21 people slain and the beginning of November, in the city of Chongqing another 33 miners were killed.