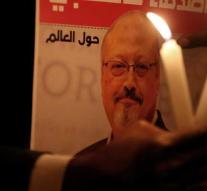 riyad - The public prosecutor in Saudi Arabia demands death sentences for the murder of the Saudi journalist Jamal Khashoggi. He was murdered in the Saudi consulate in Istanbul at the beginning of October.

Eleven people have been accused of involvement in the death of Khashoggi. The death penalty is now demanded against five of them. A total of 21 people were arrested in connection with the case. According to the chief prosecutor, Khashoggi was strangled in the consulate and his body was then cut into pieces. Where the body is, remains unknown. The research is still ongoing.

The prosecutor further reported that the Saudi Crown Prince Mohammed bin Salman was not aware of the mission around Khashoggi.