Home / World / Death Rider Toronto may have acted out of misogyny 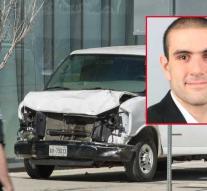 toronto - The Canadian police investigate whether female hatred was the motive for Monday's massacre in Toronto. A few minutes before he intentionally boarded a van on pedestrians, Alek Minassian posted a cryptic message on his Facebook page pointing in that direction, police detective Graham Gibson said.

In the message, Minassian wrote that 'the Incel Rebellion has already begun'. 'Incel' is an abbreviation for 'involuntary celibacy', an online movement of men who blame women for going celibacy through life. He also referred to Elliot Rodger, who shot six people in 2014 in Santa Barbara, USA. Rodger also felt rejected by women.

According to Gibson, the ten deaths and fifteen wounded who fell on Monday were 'mainly' women. The youngest woman was in her mid-twenties, the oldest in the early eighties.

Facebook has confirmed that the message has been posted by Minassian and has since removed it.