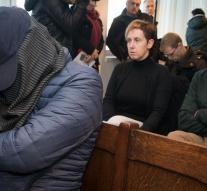 zemst - A man convicted of the death row of Belgian Merel De Prins (12) at the start of this year to five years old is released early. According to Belgian media, the 22-year-old Muhammad Aytekin has a severe eye disease and is raging blind.

Aytekin drove 85km per hour in October 2015 by the built-up bowl, when Merel came on his way. After the collision he continued. Aytekin was arrested ten days later only when he declared himself at the police station. Aytekin drove without a driver's license and during the trial he had been sentenced to traffic jams for eighteen years.

The parents of Merel responded to being relieved when a Dutch court convicted Aytekin in January for a five-year cell. 'It succeeded, Mereltje. He has his punishment. 'The relief appears short-lived and the parents respond surprised to the news about the release.

The court decided that Aytekin should leave the prison for medical reasons, provided he is wearing an ankle strap.