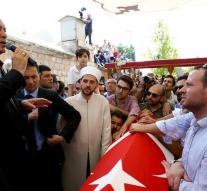 - If Turkey to reintroduce the death penalty, it means the end of the accession talks with the European Union. That said a spokesman for the German government Monday.

The Turkish government said that the death penalty may return after the failed coup last week to punish the coup plotters. The country abolished the death penalty actually declined in 2004 to fulfill one of the conditions of EU membership. The last time was an execution was carried out in Turkey in 1984.

'The EU is a community of values ​​in which it was agreed that the death penalty does not belong to those values, '' said spokesman Steffen Seibert.


Both supporters of the government and opposition in Turkey have rallied since the attempted coup behind the elected government. For reintroduction of the death penalty is considerably less support. Among others, the Kurdish opposition party HDP has support for it already excluded.