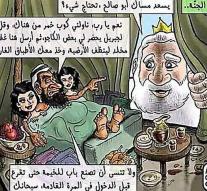 amman - A court in Jordan has a man to death convicted of the murder of the Jordanian writer-journalist Nahed Hattar. Who was killed in September when he was on his way to court to stand trial for insulting God and Islam. A month earlier, he had circulated a cartoon on social media.

The drawing shows a man with a beard smoking bed share with women and God in heaven cigar asks to bring him wine and cashew nuts. The Jordanian prosecutor had then keep Hattar. Later he was awaiting trial at liberty.

The convict is a singer of a mosque, according to the state news agency Petra. The judges considered him guilty.

The caricature was in Muslim Jordan is considered an insult to the religion. The author said he had circulated the sketch to mock terrorists and their idea of ​​heaven.