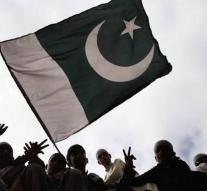 bahawalpur - A man from Pakistan has been sentenced to death for a message on Facebook. According to a court he is guilty of blasphemy. It's the first time someone in Pakistan gets the death penalty for a post on social media.

Taimoor Raza (30) would have offended the Prophet Muhammad. Raza is a member of the Shiite minority in Pakistan. At a bus stop he would have looked at a movie against a strictly Sunni community.

Blasphemy is strictly forbidden in Pakistan. Even criticism of the strict ban on blasphemy can be dangerous. In April, a critical student at a university was matched by other students because he would have offended Mohammed.