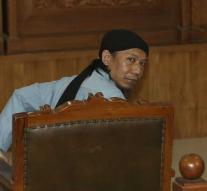 jakarta - The 46-year-old Indonesian spiritual Aman Abdurrahman, who is linked to Islamic State, has been sentenced to death by a judge in the Indonesian capital Jakarta. He is seen as the brain behind a number of deadly attacks in the country.

'The suspect was found guilty of carrying out terrorism. That is why the court gives him the death penalty, 'the judge said Friday.

Abdurrahman is seen as the spiritual leader of a group of IS supporters in Indonesia.