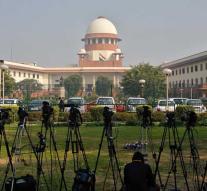 new delhi - Three men who have been convicted of a fatal gang rape and an Indian bus do not escape the death penalty. The Supreme Court ruled that the trio can be hanged, reports Indian media.

The case revolves around the rape of a student in New Delhi. A group of men in 2012 in a moving bus to the young woman. She later died in the hospital from her injuries. The case led to massive protests.

The Supreme Court had already ruled last year that the death penalty could be executed. The three men of the ages of 29, 23 and 22 asked the court in vain to review that statement. However, the judges saw no reason for this.