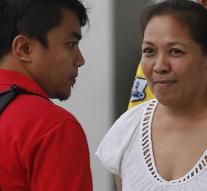 kuala lumpur - A 54-year-old Australian was sentenced to death in Malaysia for drug smuggling. She was caught with methamphetamine in her luggage in 2014 after a flight from China at Kuala Lumpur airport.

The woman stated that she knew nothing about it and that she was the victim of a man she had met online. The court ruled that she had deliberately 'blinded' herself and was part of a cunning game.

Maria Elvira Pinto Exposto was acquitted of drug smuggling in December, but the prosecutor appealed. If the punishment continues, she is hanged. She can appeal again.