Home / World / Death in Philippines by typhoon is on the rise 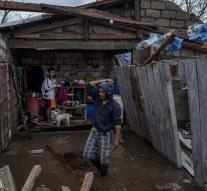 In Benguet on the northern island of Luzon, the natural violence demanded seven lives. In a suburb of Manila, a girl drowned by a flood.

Passing the typhoon is accompanied by heavy rainfall. This resulted in dozens of mud flows. The authorities fear that the death toll will increase further.