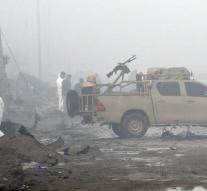 kabul - The death toll due to the attack on security company G4S in the Afghan capital Kabul has risen to fifteen. 29 people were also injured, reports the Afghan Ministry of the Interior.

The attackers left a car bomb on Wednesday at the G4S complex. Then they stormed the terrain. The authorities announced in the early morning that the fighting is over. According to the ministry, all attackers have been killed. According to a spokesperson, among the wounded are also people with a foreign nationality.

The internationally operating security company says in Afghanistan, among other things, to guard diplomats. The Taliban have claimed the attack.