Home / World / Death at a fire in London 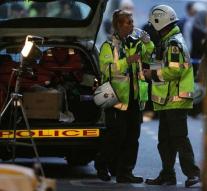 london - At the big fire in a London apartment block Wednesday died. This has confirmed a fire brigade spokeswoman Wednesday. She could not indicate how many victims it is.

The fire has started on the second floor for unknown reasons and has expanded rapidly throughout the entire tower. According to the spokeswoman, who has been in the fire department for almost thirty years, this is an 'unprecedented incident'. She has never experienced such a serious fire.