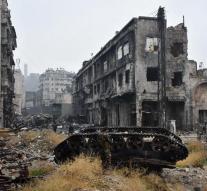 - The Syrian authorities and rebels in Aleppo have agreed that a number of rebels and civilians are allowed to leave the city to go to rebel territory in the northeast of the country. Russian Ambassador to the UN, Vitali Tsjoerkin, Tuesday in New York, said he has heard that there is such an agreement and the rebels may in a few hours can leave almost by government forces recaptured city.

According Tsjoerkin citizens to be left alone in the recapture of the east of Aleppo. That since the second half of 2012 a stronghold of jihadists and rebels. Which still exist in many frequently changing battle groups. One of them, Jabha Shamiya (The Levant Front), reported Tuesday via a spokesman in Turkey that an evacuation comes from people from the area that rebels still held. There were still 50 000 people.